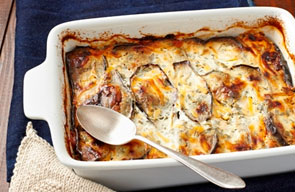 Spoon mince out. Add another 1 tsp (5ml) oil and fry onion until soft. Add celery and baby marrow and fry for a few minutes.

Stir in the mince. Simmer with a lid for 30 minutes. Add 4 tbsp (60 ml) of the parsley and season with lemon juice and pepper.

Meanwhile, preheat the oven to 180 ˚C. Place brinjal on a baking tray and brush on both sides with remaining oil. Roast for 15 minutes until golden and cooked.

Mix buttermilk, herbs and cheese and spread over the brinjal. Bake for 20 minutes or until golden and cooked.

Serve with a tomato salad with fresh herbs or lightly cooked green veggies.

Make sure that the buttermilk topping covers the dish completely, rather use a deeper than wider oven dish.