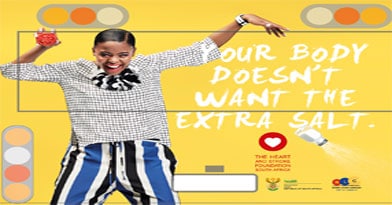 Most of us eat far too much salt. In fact, the average South African eats roughly between 6 and 11 grams of salt per day, which reaches more than double the recommended daily limit of 5 grams by the World Health Organisation. We’ve launched an exciting new advert “Your body doesn’t want the extra salt” to encourage all South Africans to lower their salt intake. So keep an eye out for it on national TV, in newspapers, on buses and at taxi ranks throughout Heart Awareness Month in September.

WHY IS EXTRA SALT BAD FOR THE BODY?

TIPS TO SLASH THE EXTRA SALT

A large portion of the salt we consume comes from processed food, on average 55% of it. Then a further 40% comes from salt that we add during cooking and at the table. A mere 5% comes from salt naturally found in food. Looking at this gives us a clear idea of what we can do to ditch the extra salt and keep our bodies healthy. We’ve broken this down into 6 simple steps.

Instead of having a heavy hand with the salt shaker, try experimenting with ingredients such as lemon, onion, garlic, ginger, herbs, spices and chilli to bring out the natural flavour of food. This is a simple step to start training your taste buds to enjoy less salty food and therefore help to reduce your overall salt intake.

Ingredients that are commonly used in cooking are normally very high in salt and sodium. These often include chicken, barbeque or fish spice, gravy powder, soup powders, and stock cubes. There is nothing wrong with using these but just keep in mind that they do contain a lot of salt so try to use less of them and consider that adding more salt may not be needed. Better yet, if you use salty spices then don’t use salt at all too.

We’ve all done it, sprinkled salt over our food before even tasting it and for many people doing this has become a habit. A habit that may be very easy to break and a simple step to lowering your salt intake significantly.

4. Remove the salt shaker from the table

An even better habit to start forming, and at the same time encouraging the whole family to slash the salt, is to completely remove the salt shaker from the dinner table. So next time dinner is ready, shake off the salt shaker!

5. Watch out for processed foods

Cook at home with fresh ingredients as much as possible instead of using processed food, which is a major source of excess salt in our diet. The main salty culprits of processed food include bread, soup or gravy powder, breakfast cereals, salty snacks like chips, processed meat like polony or viennas, hard margarine and salty sandwich spreads.

6. Look out for the Heart Mark